Situated in an old industrial neighborhood in Stockholm, the 1920s textile factory Trikåfabriken and its subsequent add-ons have been transformed into a modern and sustainable, 25,000 sqm office complex. With its five-story wooden frame extension, clad in Corten, it exemplifies how contemporary architecture can link the past to the present while adding a new layer to the city.

Located in Stockholm’s old industrial neighborhood Hammarby Sjöstad, Trikåfabriken is the oldest preserved industrial property in the area, and the original 1928 brick building now serves as the ground floor for the new edifice. Additions were previously made during the 40’s, 60’s and the 80’s and the superstructure now in place has a bold expression that offers a striking contrast to the ground level’s more traditional one. The 45-degree-angle roof has been treated as a fifth facade and is an essential element of the experience of the building from the street and from a distance.

A new landmark made possible by the use of wood

The aim was to create a new joint expression for the building as a whole, resulting in a new, compelling local landmark. This has been realized by carefully renovating the brick facade on the one hand and on the other by adding a five-story, wooden frame extension, covered with a Corten steel facade. The lightness of wood reduces the invasive impact of necessary reinforcements on this culturally and historically significant building. The material is also strongly connected with industrial history, as are the other materials that were picked for this project; concrete, steel and Corten. The latter harmonizes with the brick facade, having the same powerful materiality and warm glow, while gray steel sets the tone for the cooler color palette of the interior.

Another overarching goal was to improve the building’s relationship to the street and create functional connections inside. The previous separate entrances have been merged into one main entrance with the atrium functions as the point of departure for all tenants, and also welcomes the general public to the heart of the complex.

Intersection of old and new

The interplay between old and new is reinforced through the fenestration and facade. The columns of windows harmonize with the brick building and the facade’s rhythm of brick pilasters is echoed in the addition through subtle displacements in the steel frontage. The addition’s wooden frame is exposed not only inside, but also on the exterior through the large windows. By making the frame as visible as possible, attention is drawn to the intersection of old and new, which is also highlighted with a single-story course of glass panels that separates the original building and the addition. A visual pause between past and present. 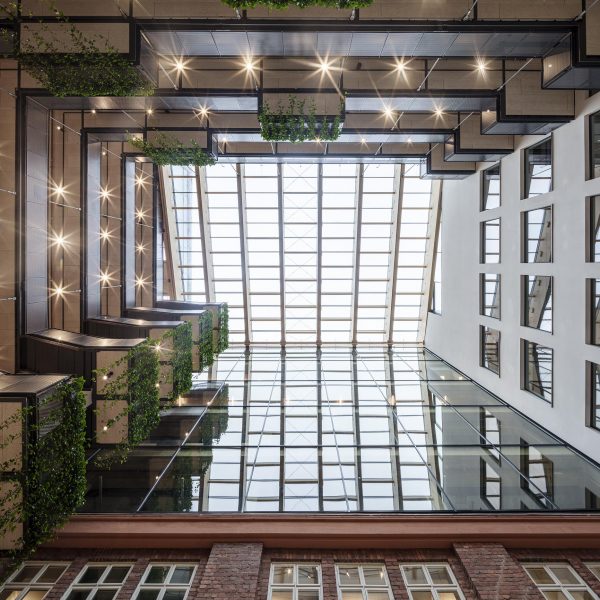 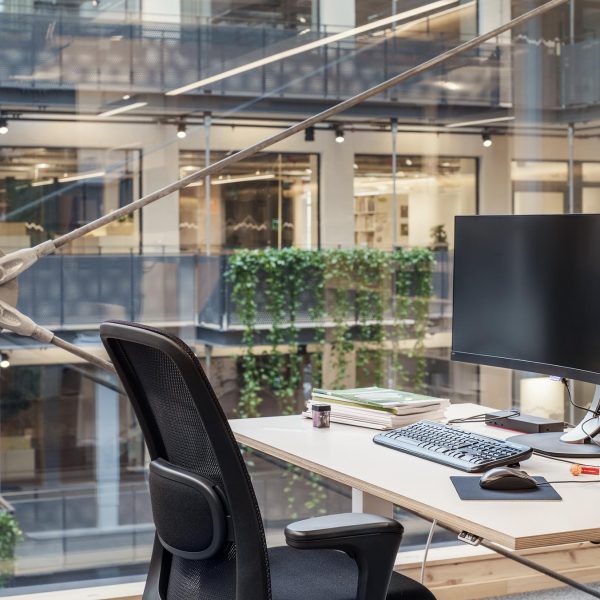 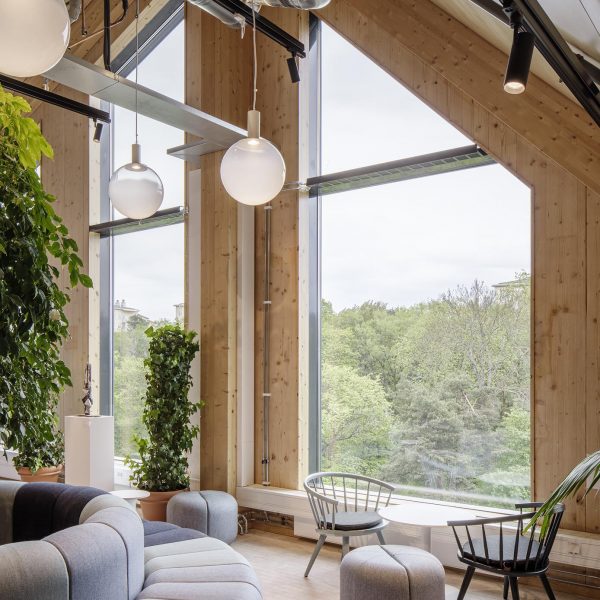 Sustainability in every aspect

The wooden frame of the addition was key. By knocking down selectively and selecting wood for the addition, CO2 emissions were 85% lower than if we had completely demolished the old building and built a new one in concrete and steel. Choosing wood not only cut construction time, but also contributes to well-being and to a healthy work environment – much needed in a large modern office space.

Trikåfabriken is a significant piece in the development of the city area of Hammarby Sjöstad. Using the existing infrastructure and refining existing buildings are important parts of the sustainable densification of the neighborhood.

Modern and comfortable work environments are one of our core activities. We develop existing or new buildings and work in a time perspective of 100–150 years. We keep updated on trends and possess considerable knowledge about the requirements for various types of offices. We pay attention to the client’s organisation, structure and philosophy.