Why doesn’t Kalmar have an event space for both sports and music? The municipality thought long and hard about this question —and the idea for the Hatstore Arena was born. With the contract in hand, Tengbom decided to design a building that presented the city of Kalmar as a dynamic cultural center.

Kalmar’s old ice-skating rink, which had previously been used for ice hockey, public skating, and figure skating, has now been redesigned and turned into a larger event center for cultural events with space for up to 3,500 people.

“We wanted to build something robust,” explains Johan Kjellnäs, lead design architect at Tengbom. “The building should be made of robust materials that don’t require unnecessary maintenance. The space needs to be durable, with many wet rooms that will see a lot of use from all the different events the center hosts. At the same time, we wanted to pull out all the stops and create a building with a unique design.”

“It’s always a good idea to have a clear vision to base the design on. That way, everyone has the same image in mind throughout the project,” explains Johan Kjellnäs.

The building’s design is reminiscent of an ice crystal that is partly transparent and glitters in the light. Inside, the arena makes up the center of the building. How transparent the building is depends on how the building’s facade is lit up. To reach the arena space, visitors follow a directed path into the building’s center. Visible from far away, the main entrance leads visitors into the arena via a wide central staircase. Following the staircase, a large, warm, red room welcomes visitors with a view overlooking the ice and event space.

“It’s a classic, but effective trick that architects use. Visitors go from a small room to a large one, where they can easily find their spot, and where the restaurant and bar are visible,” Johan Kjellnäs explains.

The exterior is designed with a corrugated, perforated aluminum panel that overlays the building’s transparent facade, adding fragility and delicateness to the structure’s overall effect. The facade is lit up from below, illuminating the building’s face with horizontal lines – almost like a stage with a backdrop. The color of the lighting can be changed, which helps a lot when matching the building’s facade to the type of event being advertised.

In terms of the design, we’ve been very conscious of both materials and colors. The color red symbolizes passion, while also being Kalmar’s team color. Black symbolizes intimacy. The wood detailing creates a sense of warmth, which is woven into the raw concrete that gives the building robustness. The circular patterns symbolize figure skaters’ pirouettes, hockey pucks, movements and community. These patterns are also found in the suspended ceiling, materials and artistic decor.

The facade is covered by a pleated, perforated alumininum sheet, which with the transparent underlying volume adds fragility and sheen to the design. The facade lighting is directed from the ground and strikes the facade where it creates horizontal lines – almost like a scene with a background. The color of the lighting can be changed based on the event to be written and help build the right mood. 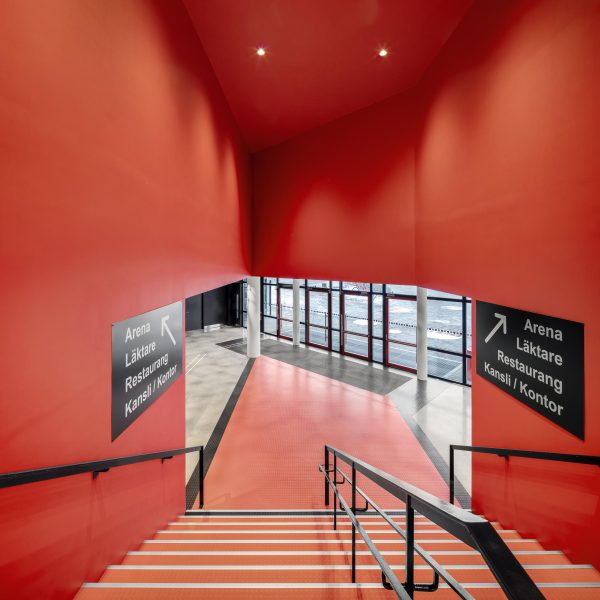 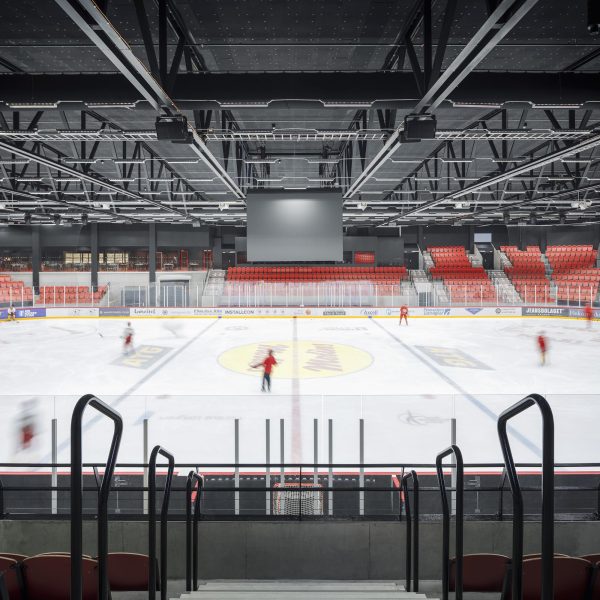 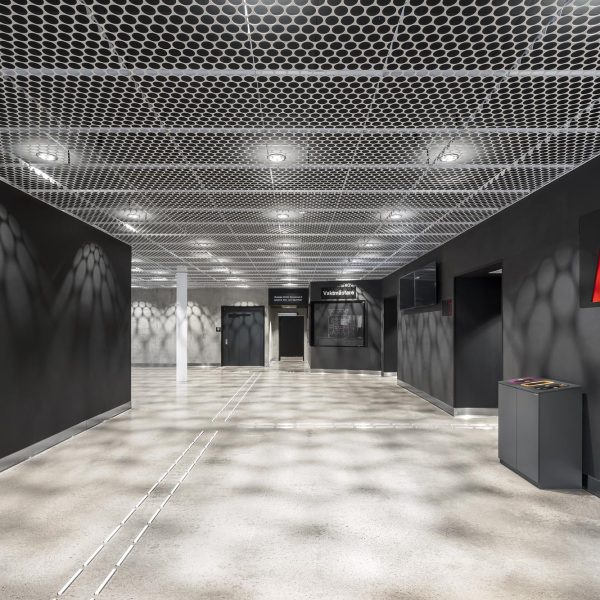 Hatstore Arena – a place for experiences

Hatstore Arena is now open, giving Kalmar residents a much-needed setting where community and experiences are the focal points. Every city needs a public space for applause and cheers. This is where dreams come true, and where, unfortunately, some dreams come to an end.

“Now we’re just waiting for artistic pieces to be added outside the arena,” Johan Kjellnäs goes on to say, “There are going to be three art pieces in the front square that will help complete the overall design. Following every stage of the project, from the initial vision to the final product, was a lot of fun. And in the words of a passer-by, “Kalmar finally has a proper event center!” 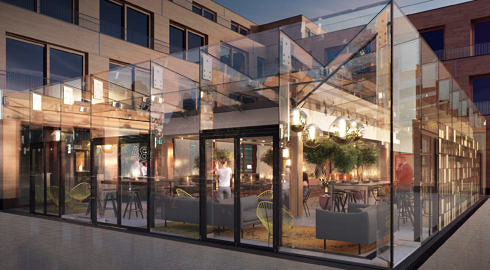 Culture and sport are areas that have come increasingly closer, not least through the many arenas that hosts both football and sports events, as well as being the obvious choice for concerts and fairs. We are one of the leading offices dealing with modernisation and new construction in these areas.